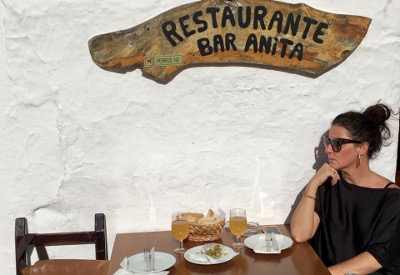 Over the years, Ibiza has become our second home.

Daniel fell in love with Ibiza and its free spirit after the first holiday he spent there when he was 18 years old. So a few months later, he moved from Paris to Ibiza where he found a businesspartner to start his first concept: The Croissant Show, still a reference and legend on the Island. After Croissant show, he worked as manager and promoter in several big clubs in Ibiza. After living on Ibiza for 14 years, he moved to Belgium, where he built up a new life and several businesses in the hospitalitysector, but Ibiza kept on calling… So he started organizing the infamous partyflights to Ibiza in the 90’s and continued to be promoter of several parties. With Ibizadesk, it was time to start a new chapter in his Ibiza story. Daniel is the driving force, the creator, the inventor and organizer of the team.

Wendy met Daniel 15 years ago in one of his restaurants in Belgium. She lost her heart to both Daniel and Ibiza.

With a degree in economics in her pocket, she worked in the first years of her career as account-manager for some big companies. But their different lifestyles made her decide soon to say goodbye to her job and start a business with Daniel. The last years she worked again as sales and accountmanager for companies, related to the event and hospitality sector and during all these years she managed the practical and paperwork side of Daniel’s businesses. She is the one that executes the (sometimes crazy) ideas behind the scenes and she makes sure all prep work is done.

Their versatile professional experience, in hospitality, events on the one hand and their knowledge of and love for the island on the other, make them the perfect partner to organise your holiday, event or incentive, on the Island itself, as well as back home in Belgium.